In clinical practice you have two main responsibilities: to determine the right diagnosis and to assign the correct treatment. This means the diagnostic tests you are using must be as accurate as possible. This way you can categorize patients as high or low risk for a certain disease and not choose blindly. When I speak of diagnostic tests, I do not only mean laboratory tests or imaging studies – you are the most important diagnostic test there is! However, a lot of physical examination points are not as useful as you’d think, yet still taught as something of high importance in clinical practice.

In order to eventually get to the Evidence-Based Physical examination, we must first begin with the concepts of sensitivity and specificity. This table is the so called Bayesian square and it is a brief visualization of how you can figure both of them out:

The green column in the Bayesian square represents the total number of patients who you know have the condition, including those who have the condition, but test negative (a false negative). The red column represents the total number of patients who you know do not have the condition, even though amongst them there are patients who test positive (a false positive). It is obvious, that false negatives and positives should be avoided as much as possible – in the first case you can underdiagnose a patient and abstain from so needed treatment, and in the latter case you can get faulty information about the patient’s condition and subject them to a battery of unnecessary diagnostic tests or treatments. 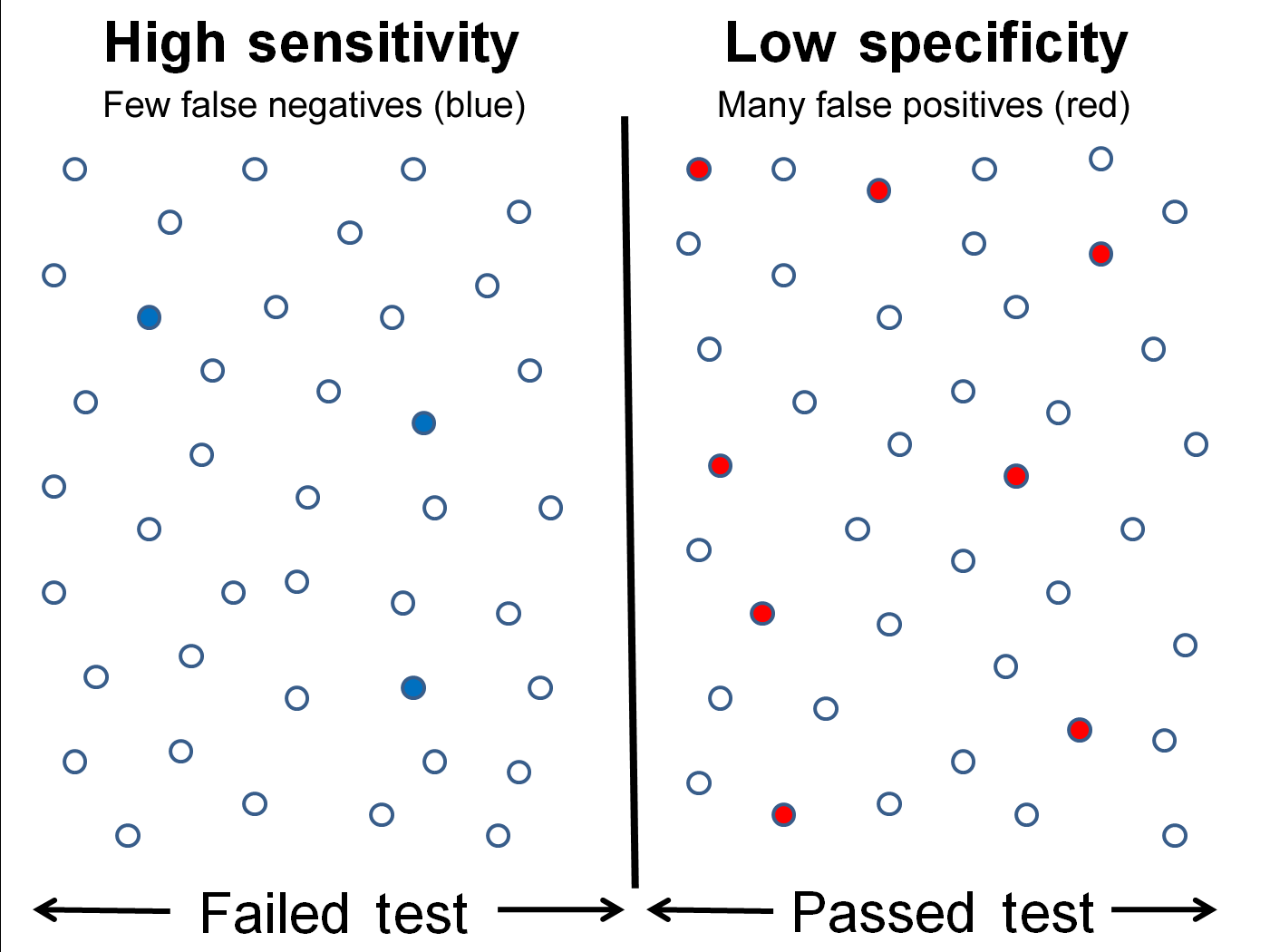 Let’s say you tested a bunch of people and now have 100 patients who you know have the condition and tested positive for it (A) using a diagnostic test that has 60% SN for that condition. How many patients might not have gotten a treatment for that condition in the process because of all the false negatives? Well, 100/(100+C) = 0.6, so C is roughly 66.7 patients. This means that if you get the right diagnosis for 100 people, 66.7 are underdiagnosed in the process (1 false negative for every 1.47 true positive). Now let’s do the same example when the SN is 90%. In this case, the number of false negatives (C) is only roughly 11.1 patients, and that means that the ratio changes to 1 false negative for every 9 true positives.

Right, on to the specificity (SP)! Here’s the Bayesian square again so you wouldn’t have to scroll up. 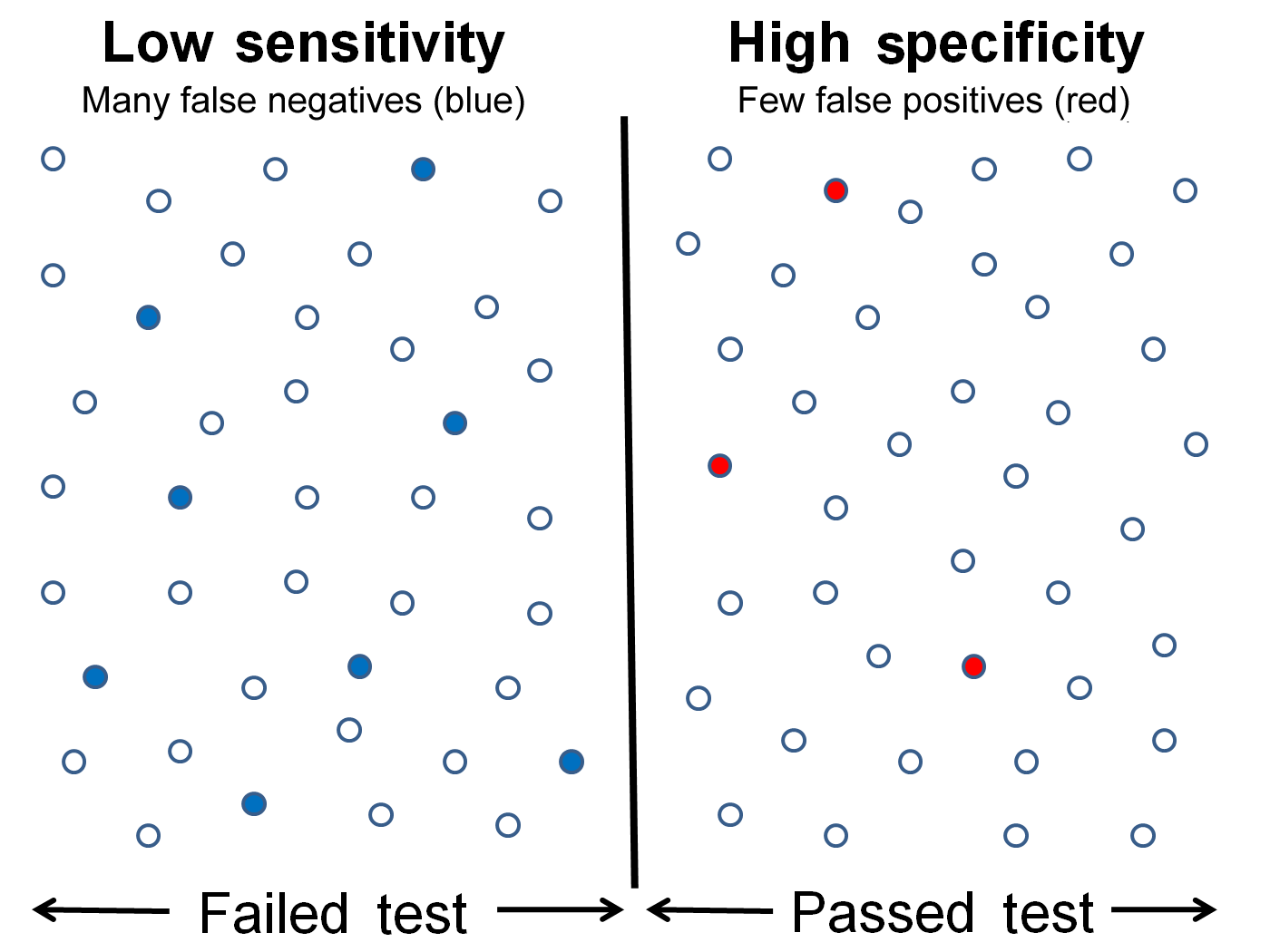 All this sounds great when you have the actual percentages, but how do you know if they’re good enough? How do you know that a patient being tested actually has/doesn’t have the condition (actually is A/D), if you’re trying to find out if he has that condition with the diagnostic test of your choice? Well, we go backwards here: the diagnosis was made using something else; SN and SP are designed to assess how well a new diagnostic test compares to what is considered the gold standard – a test that is considered the definitive approach for diagnosing a disease without, ideally, missing a disease or falsely labeling someone as sick.

So all in all, a high SN is simply a way to protect you from a false negative when there actually is a condition. But here’s a twist – a negative result from a highly sensitive test can rule a diagnosis out: SnNOut (Sensitive, Negative, Out). If you get a negative test result, there’s only a very small chance that it is a false negative, so you can safely accept it as a true negative and dismiss the condition. A high SP, on the other hand, makes sure that, if you do not have the disease, we could actually assure you that you do not have that disease, not give you a false positive test result. And in a similar manner, high SP allows you to rule a diagnosis in: SpPIn (Specificity, Positive, In), because a positive result from a highly specific test means there’s a high chance the positive result is true positive, not a false positive. Even though these mnemonics are useful in remembering what SP and SN are, they are inferentially misleading, as SN and SP are not superior to each other! The diagnostic power of any test is determined by both SP and SN. If you use a diagnostic tool that has a high SN, but a low SP, yes, you will rarely miss a diagnosis for a patient who actually has the condition of your interest, however, you will also overdiagnose a lot of patients due to many false positives from a low SP. In a different situation, if you use a diagnostic tool that has a low SN, but a high SP, you will often miss patients who have the disease, even though you will avoid mistakenly overdiagnosing patients due to a high SP.

The last thing you should keep in mind is the elephant in the room: you must always critically appraise the studies that the sensitivities and specificities were counted in. These studies could be affected by all sorts of problems. First of all, a diagnostic study can be too small to define the test’s performance with sufficient precision. Second, a number of possible biases can be introduced, i.e. spectrum bias. It arises when the patients in the study do not represent the population seen in practice: tests can simply be evaluated in patients known to have the disease and free of it, excluding those with borderline or mild expressions of the disease and conditions mimicking it. This leads to exaggeration of both SN and SP. Another bias, partial verification bias, arises when the gold standard test is not applied consistently to confirm the results of the new test. Incorporation bias might arise when the test under evaluation is also the part of the reference test, obviously overestimating the accuracy. Another problem is that the performance of the test varies considerably from one setting to another. This can happen even for the slightest reasons ranging from simple differences in the definitions of the disease to different interpretations of test results in high and low risk patients.

SP and SN might seem similar, so you need at least a little practice to not mix them up. This is the part where you take a deep breath, look through the Bayesian square again, make a few notes, your own examples and get some coffee, because we’re just getting started.

Hey! I'm from Lithuania, I'm a 6th year medical student in the Lithuanian University of Health Sciences, head of the Neurology group in our Student Scientific Society. I'm hopefully starting a Neurology residency in September, very interested in Neuroscience and extremely keen on improving the current state of healthcare and student education in my country. Evidence-based medicine, critical thinking are extremely important, so I feel a strong need to strengthen this type of education. View more posts from Donatas

One Comment on Evidence-based physical examination: sensitivity and specificity (part I).